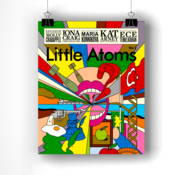 de
From the Archive - Yara Rodrigues Fowler's Stubborn Archivist
Yara Rodrigues Fowler is a novelist from South London. She is also a trustee of Latin American Women's Aid, an organisation that runs the only two refuges in Europe for and by Latin American Women. Her debut novel Stubborn Archivist was shortlisted for the Sunday Times Young Writer of the Year Award and is now out in paperback. For information regarding your data privacy, visit
Little Atoms 630 - Ben Halls' The Quarry
Ben Halls is a London-based writer and journalist. He worked in pubs, off licences and several minimum wage jobs before deciding to return to school to pursue his passion for writing. In 2014 Ben completed his Bachelor of Fine Arts in Writing, Literature and Publishing at Emerson College in Boston, MA, and completed his Master of Fine Arts at Kingston University in 2016.&nbsp; The Quarry &nbsp;is his debut novel. For information regarding your data privacy, visit
Little Atoms 629 - Peter Swanson's Rules For Perfect Murders
Peter Swanson's novels include&nbsp; The Girl With a Clock for a Heart , nominated for an&nbsp; LA Times &nbsp;book award,&nbsp; The Kind Worth Killing , a Richard and Judy pick and the iBooks store's thriller of the year in 2015, and, most recently,&nbsp; Before She Knew Him . His latest novel is Rules For Perfect Murders . For information regarding your data privacy, visit
Little Atoms 628 - Rosamund Lupton's Three Hours
Rosamund Lupton is the author of&nbsp; Sister, &nbsp;a BBC Radio 4 "Book at Bedtime", a&nbsp; Sunday Times &nbsp;and&nbsp; New York Times bestseller, winner of the Strand Magazine critics award and the Richard and Judy Bookclub Readers' Choice Award. Her next two books &nbsp;Afterwards&nbsp; and&nbsp; The Quality of Silence &nbsp;(also a Richard and Judy pick) were S unday Times bestsellers. Her books have been published in over thirty languages. Her latest novel is Three Hours . For information regarding your data privacy, visit
Little Atoms 627 - Gaia Vince's Transcendence
Gaia Vince&nbsp;is a science writer and broadcaster interested in the interplay between humans and the planetary environment. She has held senior editorial posts at&nbsp; Nature &nbsp;and&nbsp; New Scientist , and her writing has featured in newspapers and magazines including the&nbsp; Guardian ,&nbsp; The Times &nbsp;and&nbsp; Scientific American . She also writes and presents science programmes for radio and television. Her research takes her across the world: she has visited more than 60 countries, lived in three and is currently based in London. In 2015, she became the first woman to win the Royal Society Science Book of the Year Prize solo for her debut,&nbsp; Adventures in the Anthropocene: A Journey to the Heart of the Planet We Made .&nbsp;Her latest book&nbsp;is Transcendence: How Humans Evolved through Fire, Language, Beauty, and Time . For information regarding your data privacy, visit
Mostrar mais