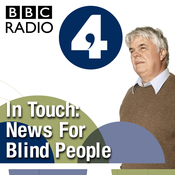 de
In Touch
As the government consults on the use of e-scooters on roads, Christiane Möller of the German Federation of the Blind and Partially Sighted (DBSV) tells us about the impact the vehicles have had on blind people in her country. And Adam Solan, a teenager who has already struggled with abandoned bikes for hire in Oxford, gives us his perspective. And Valentine's Day is nearly here. But what are the challenges of being a blind bride? Sassy Wyatt is a blogger and she's agreed to keep us about how she is preparing for the big day... It won't be long until we know exactly who will represent Great Britain in the Paralympics. And we're taking a closer look at some of the runners and riders. But Nicola Naylor won't be travelling at speed. She talks to Fern Lulham about the exacting skill of dressage. Presented by Peter White Produced by Kevin Core
Red Button Reprieve and Working Overseas When You're Blind
The BBC is pausing its plan to shut down the Red Button text service after protests from blind users. But can it be saved long term? How safe are blind children as they go online? And the opportunities on offer for blind 18-35 year olds to volunteer to work abroad. PRESENTER: Peter White PRODUCER: Mike Young
Sjogren's Syndrome and Blind Surfing
A call has gone out for more male blood donors. It turns out that male blood is crucial for the eye drops needed to control a rare eye condition. Sjogren's Syndrome is an auto-immune disease which can have several effects including aggravating already dry eyes. We'll hear from someone with Sjogren's Syndrome and an expert on the condition. And we meet Melissa Reid - a gold medal winning triathlete who now has become a champion surfer too. Presenter: Peter White. Producer: Mike Young.
Talking Buses and A New Way To Read
Peter White hears about the talking technology that is slowly being added to the UK's buses. When will more public transport get the equipment that tells you where you are and where you're headed? We hear about the app designed to help people with macular degeneration to continue to read text. Producer: Mike Young Presenter: Peter White
Help On Your Doorstep?
Peter White with a focus on smaller blind charities in the UK. We hear from Visionary, an umbrella organisation which represents more than a hundred of these charities. The Chief Executives of Sight Concern Worcestershire and Sight Service Gateshead tell us about the challenges they face. And we hear from the people who use the services on offer. PRODUCER: Mike Young.
Mostrar mais

In Touch: Podcast do grupo

In Touch: Rádios do grupo