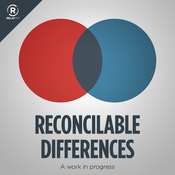 de
Reconcilable Differences 124: Figures of Action
Merlin is healing just as John is getting sick. Merlin has chained several bad decisions, and John has concerns about Merlin's office wall. John has moved some things around in the doc. In follow-up, John has acquired some Studio Ghibli from iTunes and reports back. This leads to further discussion of the beauty of Miyazaki films and a consideration of what makes them so special. Are the roles of filmmakers similar to the work of comics artists? What if you're just not a fan of currently fashionable inking techniques? *Hollow bones*. Your hosts talk about the new Netflix show, _Cheer_. They could have gone a lot of directions, but we can all agree that there are many, many injuries to be had. Next up, a recent _Roderick on the Line_ conversation leads to a consideration of the voice in your head alongside the ability to visualize. Consciousness is very difficult to discuss. Finally, there's some back-door Secret Weird Things People Do about the cadences that trigger stuff in your head. Especially songs. John thinks Merlin definitely doesn't have an actual photographic memory. And she's loving him with that body, I just know it. (_Recorded on Tuesday, February 10, 2020_)
Reconcilable Differences 123: Squirrel List
This week kicks off with some accidental video and an update on Merlin's ill health. John has been maintaining some lists, and Merlin shares some confessions of the Banker's Box lifestyle. Many things still need to leave my house. A litany of the lost things is presented and analyzed, and a catechism for finding the lost things is interrogated. In follow-up, Merlin is ready to present his iTunes Results regarding the acquisition of Studio Ghibli movies. John finally draws a line in the sand. Why split the movie? Why no extra features? Is it Siracusa's day to watch Roderick? The magic of Miyazaki is extolled. So much smoking. Speaking of media homework, John has a new assignment for Merlin. Then, some documentary talk in general. John is back to harassing Merlin about how often he washes the towels, and Merlin is provoked into making a confession of fanciness. Some friend. John, in turn, confesses to being upset by Merlin's ghastly pet companions. Everything in the house is Bando'd. Merlin has some questions about Daisy's technology stack. This leads to a pretty deep dive on the design trade-offs that go into contemporary dog-tracking innovations. Finally, the boys return to Secret Weird Things People Do, and John has a bath mat concept for consideration, plus a hot tip on bathtub materials. (_Recorded on Thursday, January 30, 2020_)
Reconcilable Differences 122: A Fib of Omission
Things kick off with an administrative meeting about the doc. Merlin tries to keep John from sneaking in, and John thinks Merlin should just use his eyeballs. Analogy sandwiches and their contents are debated. John lives with an unnamed two-towel person, and Merlin thinks he knows who it is. Spock loses his phaser, and Merlin earns his first multisyllabic laugh from John. Merlin can tell whether you are an AT&T customer, and John thinks phone calls in general are creepy. Merlin demonstrates his robot hands for John. Merlin thinks he's an open book, and John realizes there's always something to be yelled at about. There's also some fairly harrowing cat follow-up. In a mini-topic, John talks about Studio Ghibli movies (finally) being available digitally, and Merlin offers to take one for the team and report back. Also, some talk about metadata. Merlin has questions for John about what constitutes a "rally." Is there a better word for having to thread an existential and chronological needle in life? Because that's what Merlin needs a name for. Regardless of what you call this phenomenon, it's not about being first or fastest; it's about timing all the jobs and obligations that you know about, as well as leaving padding for when (inevitably) more comes up or stuff changes. Like project management and software development, life has a funny way of hiding dependencies and disguising milestones. This leads to a deep dive on understanding the culture of your environment and the foibles of human nature. People, amirite? (_Recorded on Tuesday, January 14, 2020._)
Reconcilable Differences 121: Impotent Hydra
Things kick off with John's Mac Pro prep mess. This is all *well beyond* Preparing the Way. This leads to a surprisingly detailed exploration of the challenges posed by setting up a new workspace given the constraints of the room and gravity. Cables, man. *Cables*. In a related topic, Merlin is struggling with post-holiday mess stress. Sisyphus is pushing another Sisyphus up a hill. You *really* don't want to make Daddy bring in his banker's box. How long before the elves arrive to remove all these yogurt containers? Maybe they'll "do it later." Stuff your sorries in a sack! Also, this new bean bag chair is very, _very_ large. Christmas Results are discussed further, and John has makeover ideas for Merlin's lounge. John's vegetarian has recently widened her palate. Finally, John has a new pinboard, but there are some design and integration challenges. Merlin gratefully receives the only gift he's wanted for years. 🎢
Reconcilable Differences 120: Where the Packages Sleep
In the interest of timeliness, this episode, recorded Tuesday evening, has been rushed to you on an accelerated schedule. John continues to Prepare the Way, his wife can't close one eye, and there's a Spoiler Slot on HBO's _Watchmen_. (_Recorded on Tuesday, December 17, 2019._)
Mostrar mais